NOTE : Friendly – Game forfeited by Ewell Saxons for not being able to field a full strength team. WHFC automatically awarded the full 3 points 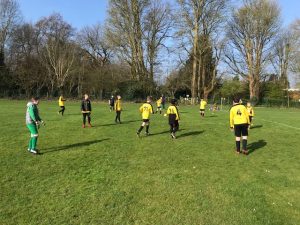 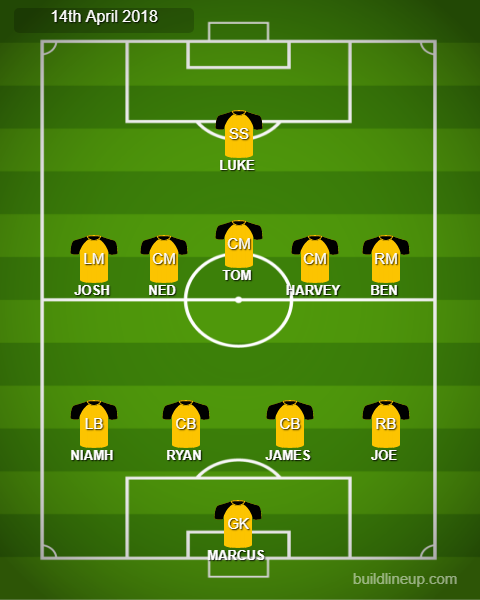 SUBS – JOCELYN, CONNOR
KICK OFF
– GOAL 1-0 Ryan in defence, diagonal cross field ball to Ben on the right wing, who runs with the ball and crosses into the box. Keeper saves but Ned slots home the rebound
– Luke hits the post after a strong build up from the wing between Niamh, Tom and Josh
– Poor clearance from their keeper falls to Ned who passes to Luke who shoots just wide
– SUB Josh and Harvey off for Jocelyn and Connor
– Attack from ES shot from the right hand side of the box. Marcus saves but spills it..gathers up quickly before their player can tap in
– ES attack across field. Shot just misses the right post.
– W.H. free kick in our half. Ryan takes with a long ball forward to Ben on the right wing who runs in and shoots just wide of the left post
– GOAL 2-0 great build up from Ben in own half who puts a through ball into Connor, passes to Ned who shoots, keeper clears to Connor who shoots and in off the left post
– Straight from the kick off, ball intercepted and passed to Connor on the left wing. Short run and cross back to Jocelyn on the edge of the box who shoots and hits the cross bar…so close
– ES free kick on the right wing inside our half. Ball comes in and is cleared to just within the box that produces a scissor kick attempt on goal
– SUBS Josh and Harvey on for Niamh and Luke
HALF TIME

SECOND HALF
– Great build up from Tom who puts a lovely ball into Connor on the left wing. Shot goes out for a corner
– GOAL 3-0 Corner taken by Ryan which comes off a defender for an own goal
– GOAL 3-1 Good build up and move by ES down the left hand wing is crossed in for an easy tap in
– SUBS Luke and Niamh on for Ned and Joe
– ES attack and a great ball from within their half diagonally across the field puts 2 players through, but just offside
– GOAL 4-1 Ben runs down the wing..cross field ball to Tom who passes into the box and slotted home by Jocelyn
– GOAL 5-1 Throw in 3 yards from the byline on the right wing is crossed to Harvey following a combo 1-2 from Ben/Tom. Harvey picks up the ball and scores
– Great push forward from Josh who runs and crosses down the left wing to Luke in the box
– ES on the attack…30 yard cross field ball from the back is picked up by their forward who takes it to the left and shoots. Saved by Marcus for a corner
– Pressure from ES down the right wing with a combination of passes and a shot that crosses the goalmouth but no one there to finish
– SUB Ned comes on for James
– Ball through to Ben on the left hand edge of the box who shoots but good foresight by their keeper who rushes out to save
– End to end. Attack by ES and a through ball. 1 on 1 with Marcus who makes a great save. Quick kick out for a speedy, fluid counter attack produces a corner
– Corner taken by Connor ends with a goalmouth scramble and clearance
– Attack down the left wing and cross is missed by Harvey, Josh and Niamh. So close
– GOAL 6-1 Build up from the back with Ben and Joe is picked up by Ryan who passes to Harvey shoots and scores
– So close to another. Build up from midfield with Josh passing diagonally to Ben on the left who crosses back in but JJ and Josh can’t finish
– GOAL 6-2 Free kick to the ES 30 yards out results in a great goal that Marcus just can’t reach, along with being blinded by the sun
FULL TIME

MAN OF THE MATCH – BEN

Today’s game was a milestone for some of the players. We saw great attacking wing play, which is something I’ve been asking for since the start of the season. We also saw our Goalkeeper brought into the game with some great back passes to help get us out of tight situation’s! I’d like to see more of that please, although the defence should be careful where they’re passing the ball back – we don’t want to put our GK under any unwanted pressure!

Six goals today with five different scorers and everybody had a hand in at least one of the goals, we’re starting to play like an 11-a-side team with some terrific passes and speaking as a Manager – it doesn’t get better than that! As we start our final games for the season there’ll be an opportunity for everyone participate in all positions (except GK!) and I’ll be looking for good starts and committed players both in the tackle when we don’t have possession and in the passing when we do.

Best of luck!
Yours in sport,
Nigel