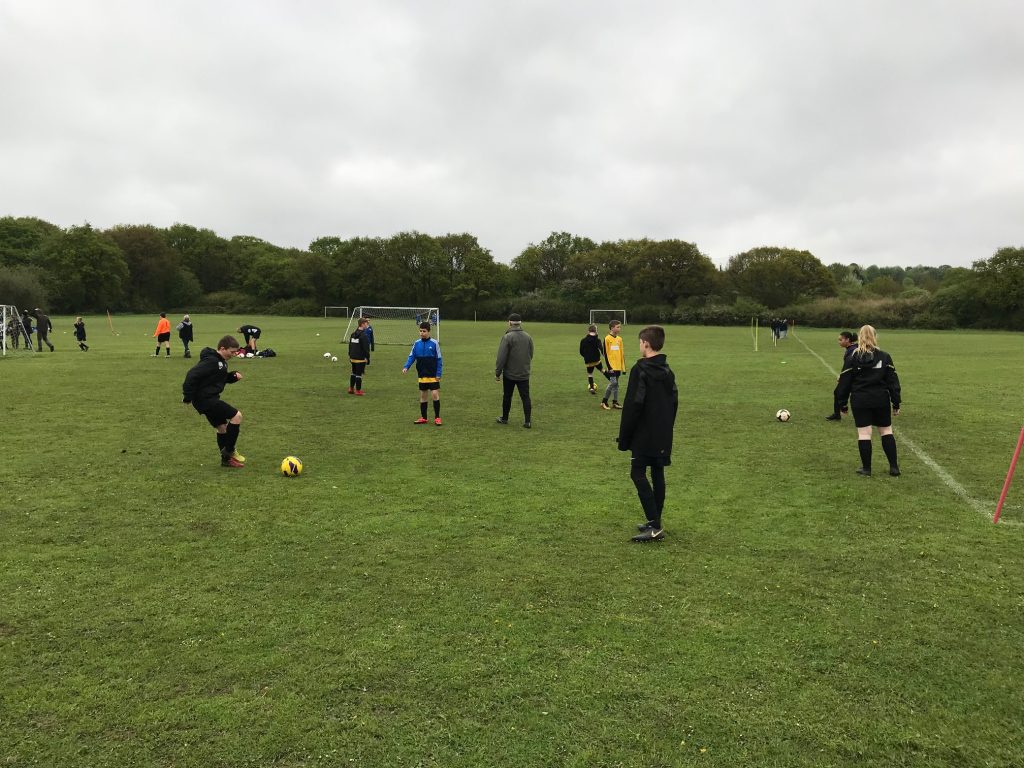 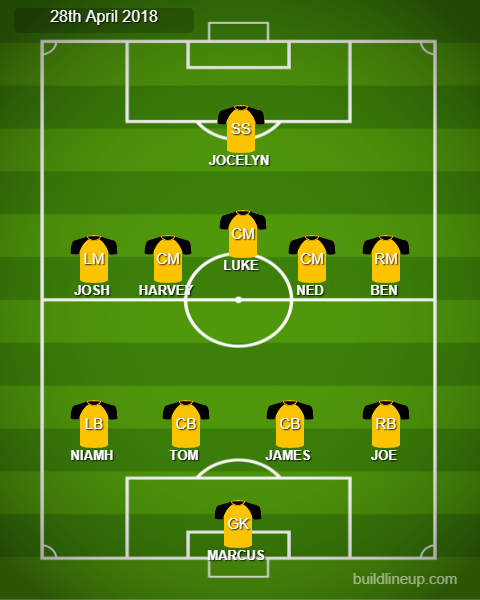 FIRST HALF – WH KO
– Good run from Josh on the left hand wing, passes to Luke, back to Josh – cross is cleared for a throw-in
– Joe makes his presence known with a good defence challenge
– More pressure form WH, this time on the right wing. Throw in from James is knocked on by Harvey and forced out for another throw-in
– Another WH defensive tackle and clearance, this time by Tom
– Counterattack from HY is dealt with by Joe
– Midfield pressure from HY – through ball to their forward, but WH spring the offside trap. Free Kick to WH.
– Free Kick eventually lands with Ben on the right wing who beats a player and passes to Ned in the area who shoots. Keeper makes a save for a corner
– GOAL 1-0 Corner comes in from Ben. Bit of pinball in the box, but ball falls to Harvey who taps in.
– WH continue to pile on the midfield pressure
– HY attack that is cleared to their centre mid, who has a first time shot that goes just wide of the right hand post. Goal kick
– Superb save from Marcus who reads the through ball well from HY that splits our defence. Marcus comes running out to kick the ball clear.
– HY started to pile on continuing pressure. Attack is broken up and cleared by Joe
– Another HY attack that is dealt with by James who uses his strength in a 1-on-1 situation with their forward to force the ball out for a goal kick.
– Speculative shot from HY 35 yards out goes wide for a goal kick,
– Continued pressure from HY, this time dealt with by a headed clearance from Joe… who is having a blinder
– More attacking movement from HY, this time cleared by James
– So close! Goal kick from HY falls to Joe who makes a great pass to Ben who is 1-on-1 with their keeper, but makes a great save for a corner
– Corner is collected by their keeper who immediately kicks out – counterattack was on, but Tom makes the important challenge
– What a tackle by Tom : Ball is passed through to HY forward who is clean through. Tom steps up the pace and makes a brilliant slide tackle. Ball trickles back to Marcus for a goal kick. Superb!
– Good build up play by WH on the left wing. Niamh passes to Josh, who has a 1-2 with Jocelyn
– More defensive interceptions by Tom, who breaks up another HY attack for a corner
– Corner comes in, but is knocked wide for a goal kick
– GOAL 1-1 HY pick up the goal kick in midfield, and create a move down the left wing. Pass into the box is met by their forward who slots home
– Straight from the off, the ball is smoothly passed between Luke, Ben and Ned whose shot is forced wide for a corner. Great immediate response from WH
– Corner is cleared for a HY counter-attack. 2 on 1 with Marcus, who reads the situation well, comes flying out to clear it for a throw in to HY
– Marcus makes a brilliant double save, with cat-like reflexes to foil a clear chance for a 2nd by HY
– GOAL 1-2 Build-up play from HY down the right wing. Cross/Shot loops into the top left corner. Lucky break by HY there
– HY passing the ball around midfield and then spot a forward who receives the ball. Tom is no fool, and reads the situation to make a challenge. Loose ball is collected by Marcus
HALF TIME

SECOND HALF – HY KO
– HY throw in is nicely dealt with by Jocelyn
– GOAL 2-2 Great play down the right hand wing between Harvey and Ned. Ned passes to Harvey in the area who controls and shoots across the goal into the bottom right hand corner
– Good link up play between Jocelyn and Niamh on the left hand wing. Goes out for a throw in that Josh takes which continues the pressure from WH in this section of the park
– GOAL 2-3 Ball is cleared from the WH by-line, but only as far as a HY midfielder on the edge of the box, who shoots into the top right hand corner. Good goal
– Josh showing a bit of muscle in a 1-on-1 with the HY forward. Josh shields the ball which goes out for a goal kick
– GOAL 2-4 Goal kick comes out to the HY right hand winger who shoots first time to just beat the keeper
– HY ramping up the constant pressure on the WH back line now. This time, the attack was broken down by Joe, who knocks out for a corner, which subsequently comes to nothing
– Offside trap played by WH that forces a free kick to the away team
– Great play and attack down the left hand wing between Jocelyn, Niamh and Harvey who split their midfield with triangles
– Pressure from HY down the right hand wing – shot goes out for a goal kick
– Good attack by WH. Josh’s clearance is picked up by Ned who has a 1-2 with Ben, which is broken down by the HY defence, but the last few minutes have been encouraging for WH
– Tom strikes again, and thwarts another attack by HY. Extra Kudos as he is clearly showing signs of an old injury that has flared up
– More left wing action, this time between Josh and Niamh who push up and create some positive forward momentum
– GOAL 2-5 HY run down the right wing. Cross is missed by all the defence and is tapped in. Sloppy goal to give away
– Instant pressure from the off between Luke, Harvey and Tom. Tom has a shot which is cleared. Counter attack on, but WH trip the offside trap. Free kick to the yellows
– Great tackle by Ben on their left wing, which breaks up the counter attack.
– With no subs, each WH player is playing out of their skin and are a credit to the team
– Superb reading of the game by Josh who spots a diagonal ball form their left wing to right wing, and produces a burst of speed to force the ball out for a goal kick
– HY piling on the pressure now, and have been for the past 2 mins. WH can’t seem to clear it. Ball is finally collected by Marcus who calms down the play
– Good strength from Tom who doesn’t take any nonsense from their forward, and forces the ball out for a goal kick
– Skilful play by Luke who beats 2 players and passes to Jocelyn, who makes herself know up front and forces their defence to make a tackle for a throw in
– GOAL 2-6 Controversial decision by the ref who ignores a clear offside call by the linesman, waving play on, leaving our defence no chance to get back to stop the ball going in the back of the net
– Good save by Marcus to stop another attack by HY
– GOAL 2-7 Clearance falls to their midfield who make a few passes between them, ends up with their forward on the left hand edge of the box who shoots and scores. No subs is definitely showing now – WH are feeling it
– GOAL 2-8 James makes a clever back pass to Marcus, whose clearance cruelly ricochets off their forward who taps in
– Free kick to HY on the right hand edge of the WH area. James and Harvey form the wall. Free kick comes off James who, along with Harvey, stand resolute in their positions. Rebound is forced out for a goal kick
– Josh takes the kick with Niamh in his sights. Great play by Niamh down the left hand wing who runs with it, passes to Harvey, who returns the ball to Niamh and eventually forced out for a throw in
FULL TIME

MAN OF THE MATCH – TOM 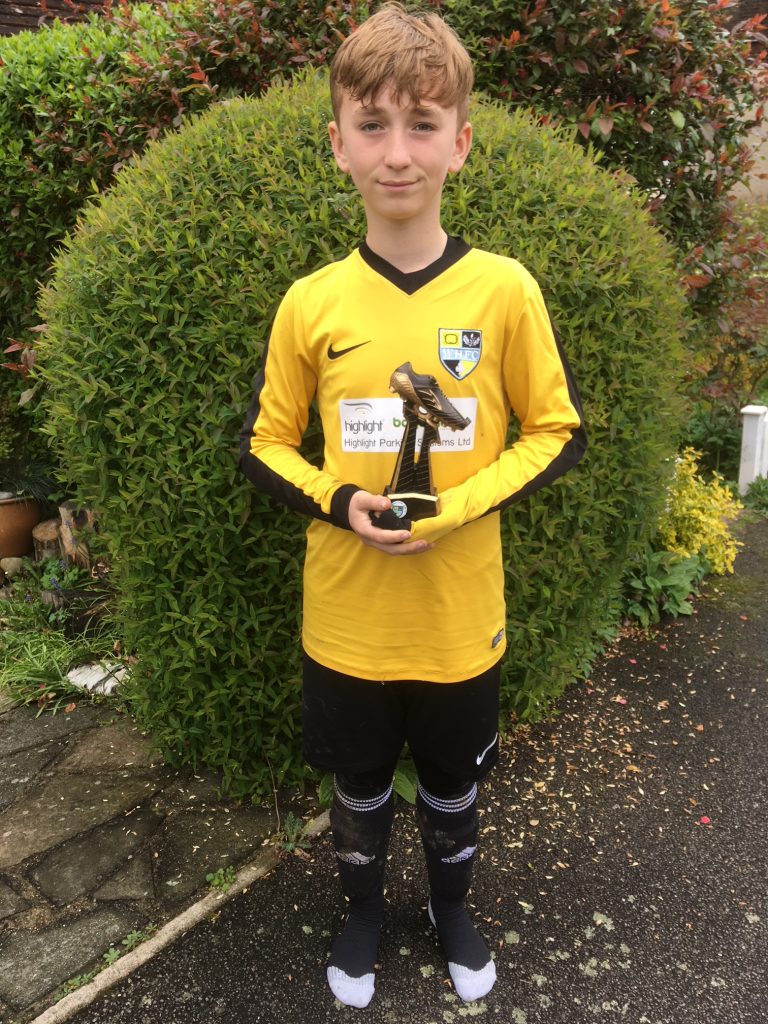 The score line in today’s game does not reflect the effort and tenacity displayed by our under 13s, every one of our 11 players should be applauded for their effort. For the first twenty minutes we controlled the game and up to the half time whistle you would have thought WHFC would take the points. I think that being unable to field any substitutes hindered our progress and we started to get tired, Hook could have scored more goals but for some really good saves from our GK . I genuinely believe that if we had a full squad we would have won that game. On the upside, we know their strengths and weaknesses and we play them in two weeks’ time, so I’ll be looking for a more flattering score line!

As I said to the team after the game, I don’t think that individually they know how good they really are… We have two games left and in those remaining matches I would like the team to enjoy the ball more, when in possession I’d like you to try and beat the opposition player rather than just attempt to clearance, when you have the ball try to give yourself time and look for a pass.

Our current league position is forth in our division, we have the opportunity of finishing second! But we need to work hard as a team to achieve this.

To quote Duran Duran, we need to be ‘Hungry like the Wolf!’