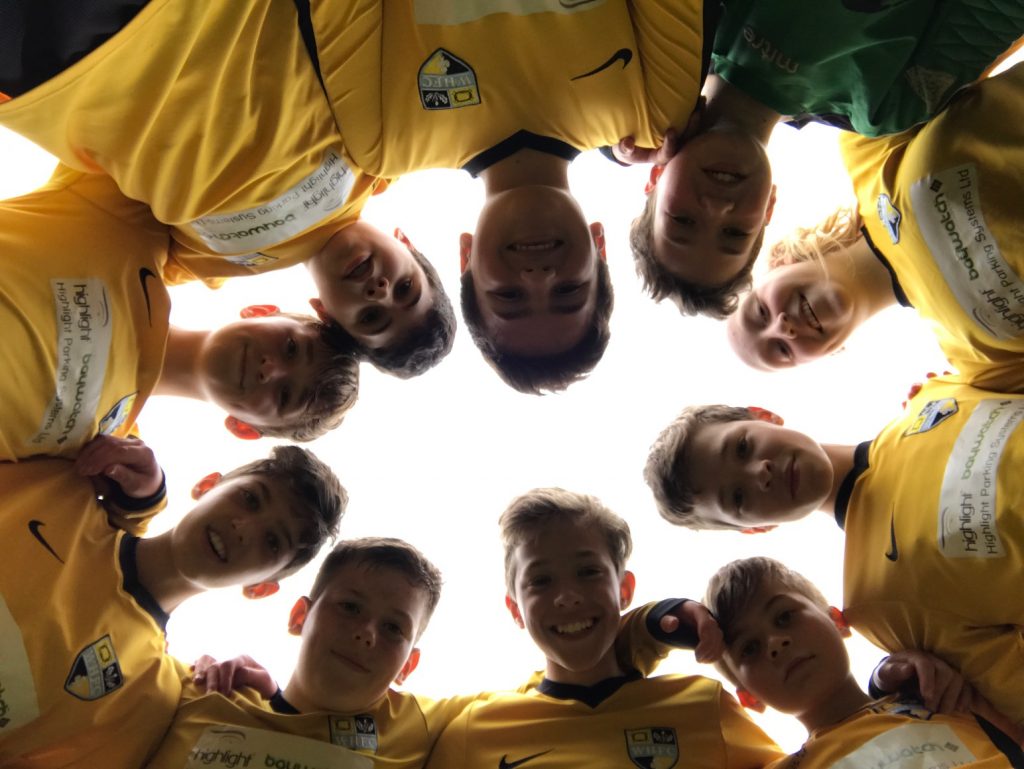 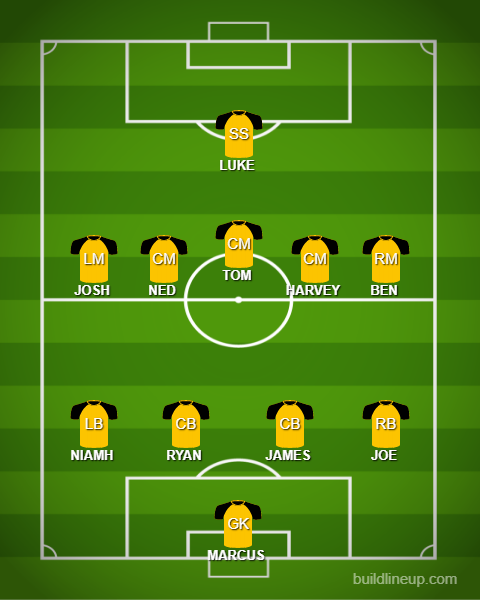 – Another good clearance, this time from James. Ball falls to Ned who has a shot which is saved by their keeper

– Bit of pressure form HY with a move down the right wing. Ball goes out for a HY throw, but foul throw changes possession to the yellows

– Good kick by Marcus, which is collected by Ned, a neat interchange with Niamh, and the ball is kicked out for a WH throw

– Tom takes the throw to Ben, who takes it to the corner flag which the whites can only defend by kicking out for a corner

– Ben takes the corner, Ryan pounces and shoots, but is cleared frantically for a yellow throw

– Great vision by Luke, who nearly picks out Ben with a cross field diagonal ball, but just intercepted.

– HY attack on the right hand wing, but Marcus is there to stop the attack

– Goal kick goes out to Tom, who tries to pick out Ben, but the ball just goes out of play. Again, good vision from the midfield

– Goal kick by Marcus goes to Ben, who looks up and picks out Ned with a fantastic pass. Ned in turn passes to Harvey who is clean through but shot just goes wide. Flowing football there by the yellows

– Nice piece of skill and pace from Ryan, who matches their forward for pace, stops and turns on a dime, leaving their 2 forwards in no man’s land. and passes the ball to midfield. Ball lands at Harvey’s feet who shoots – saved by the keeper. Great counterattack from the yellows

– Free kick to WH on the half-way line. Ryan takes. Ball goes into the HY penalty area, who struggle to clear. WH making their presence known

– HY attack, which Ryan breaks up

– Game is paused for a ball change

– Marcus takes a goal kick which goes to Niamh, who does a cheeky back heel to Luke on the left hand wing, piling on the pressure to HY

– HY have the ball and are stringing a few passes together on the left wing, which Ben breaks down with an important tackle

– GOAL 1-0 What a great goal. From deep within our own half, Ryan spots a forward run by Ned and produces a fantastic 35-40 yard pass, which splits their defence. Ned sprints onto it, one on one with the keeper, and slots in off the inside edge of the right hand post. Great goal and well deserved

– SUBS Josh on for Ross, Connor for Niamh

– Free kick to WH on the right wing after Ben was fouled – HY player took the man, not the ball, but free kick comes to nothing.

– GOAL 1-1 HY attack with a ball that splits the defence, through to their forward, who slots home

– Josh foresees and intercepts a HY attack down their right wing, gets the ball and passes to Luke. Nice play, and pressure

– More footballing brains being shown, this time by James, who calculates the HY looping ball forward, and volleys clear

– Corner kick to HY, which is cleared by Harvey

– GOAL 1-2 WH attack on the left wing is broken down, with an immediate counter attack. Ball is crossed to their forward on the left hand edge of the box, who shoots and scores

– Bit of strength by Josh who muscles their forward off the ball, and passes up field to Luke

– Free kick to HY inside the WH half

– GOAL 1-3 Free kick goes over everyone, and loops in just under the bar

– Great running and tackle by Josh which forces a yellow throw. Josh takes the throw to Harvey, who takes on a man who can only foul him. Free kick to WH

– White attack is broken down by Josh, who passes to Connor. Connor looks up and makes a pass to Luke who is fouled – free kick to WH

– Brave and important save by Marcus who comes out to stop a near sure goal. Well played Keeper

– Good link up play between Ben, Joe, Harvey and James

– Nice play by Ben down the right wing, which goes out for a throw in. James take to Luke, who makes a clever forward run into their box, beating a few players. Cleared for a throw in to WH. Good pressure and a good start from the yellows

– Sweeping counter attack from HY who make a diagonal cross-field ball from their left wing to right wing. Cross comes in, and cleared for a corner

– Corner comes in, and after a bit of pinball, is cleared by James and Joe

– HY Free kick in their own half. Ball pumped forward, but cleared by Ryan

– Pressure from the whites, ball is played into the WH penalty box, but free kick awarded to WH for a foul

– SUBS Niamh on for James, Ross for Joe

– Control and pass from Tom, who looks for Ben with a diagonal ball, but just goes out for a HY throw

– HY deflected shot is intercepted by Josh, who stops the ball going out for a corner on the by-line, and clears

– Another 40 yard ball forward from Ryan, who spots a run by Ned. Ned controls the ball on the run into their box. Rushed challenged goes out for a WH throw

– Good forward run by Ryan from deep within our own half. Beats 2 players and makes it to just over the halfway line before the challenge is made

– GOAL 2-3 Foundation move from the back starting with Josh, Ross, then to Harvey and Ryan. Forward ball to Ned, who puts pressure on their back line. Keeper makes a mistake, and they appeal for hand ball. Ball falls to Ben, who has his back to goal, swivels 180° and shoots first time into an open goal. Great bit of skill from Ben, and a positive sweeping move from the team

– Added pressure from Ben on the right wing, who beats a man, and crosses into the box to Harvey, who has a shot but saved by the keeper. This is more like it from the yellows

– Clearance from Josh breaks up a HY attack

– Lovely save by Marcus using his feet. Ball falls to Harvey, who makes a run down the right wing and passes to Ben, who is tackled. Great stuff from WH.

– Against the run of play, HY are having a brief spell of activity, but the WH is showing who is running this second half show, with continued clearances from Ross, and Tom

– Right hand wing run from Harvey, and pass to Ben, who chases the ball down all the way to the HY by-line and forces a clearance for a throw in, 4 yards from the corner flag. Ben’s persistence stopped the ball going out for a goal kick, and piles on the pressure from WH onto HY

– HY attack on the right hand edge of the WH area. Forward runs in and shoots. Marcus sees the danger, and rushes out to make a hugely courageous save with his face. Stays down injured for a moment but he’s ok, and thanks to him, WH are still in the game

– Marcus fired up after that, as he produces a monstrous goal kick

– Nice move down the left wing between Connor, Josh and Harvey

– Niamh is pumped! Build up play between Ross and Ryan comes to Niamh, who passes forward to Ned, but comes straight back to her, and has a first time 40 yard attempt on goal which goes out for a goal kick

– SUBS Joe on for Tom, James on for Ned

– WH throw in deep within the HY half, goes into their box, and is kicked out for a WH corner, which comes to nothing

– Ross piling on the pressure in the last few minutes

MAN OF THE MATCH – ROSS

The last game of the season! Against Hook Youth Blues!

Unfortunately, despite all our hard work we lost this game 3-2. Frustratingly we had the lion’s share of the first half but we just couldn’t finish – in my opinion we should have gone in at least two goals up.

What appeals to me though is our work rate, we are starting to work hard for one another – our passing and running off the ball has improved dramatically, as has the understanding between midfield and defence – we still have some work to do in this area and once we have buttoned this off we’ll start to look like a premier league side!

I have asked the Chairman for £10 million pounds, we need three outfield players of real quality and some new training facilities – hopefully this should come on line during the cricket season, in time for the start of the football season! We’ll see…

On a personal note, I would like to thank all the parents for bringing the players to the matches and to training, without your input literally nothing would happen! The encouragement the children receive during the games is first class and I feel it is important to note that goes a long way to helping them improve both individually and as a team. I would also like to thank all those who help out on a regular basis with oranges at half time, putting up the goal nets, running the line, running the club blog and anything else I missed! A big thank you as well to Steve whose help has been immeasurable; as a sounding board, tactician, trainer and whose infectious enthusiasm has resulted in a few goals! Thank you as well for the wonderful gifts I received after the game on Saturday, it was a lovely gesture from all of you.

I will continue training for the next few weeks and try to get friendly games where possible, maybe even a tournament; failing that there is always Power League…